More than 25-Years ago, Henry S. Cole, Ph.D. founded the firm to provide scientific support for communities, environmental organizations, law firms, and tech companies working to improve the environmental health and sustainability of communities and ecosystems.  We have been able to realize our vision through:

Career: For more than 40-years Dr. Cole has applied his background in environmental and atmospheric sciences toward cleaner air and water, toxic use reduction and safer communities. His career includes academics, government (senior scientist with EPA), a decade as Science Director of Clean Water Action/Fund, and consulting.  Link to Detailed Resume.

Special Expertise: Dr. Cole has specialized expertise in the fields of air pollution meteorology and air quality modeling and served as a senior scientist and section chief in U.S. EPA’s Air Quality Office and as an expert witness in legal and administrative cases in the U.S., Canada, and the Netherlands.

Air Quality Modeling: We are able to offer air quality modeling through our associated Howard Gephart, meteorologist with Air Resources Specialists, Inc.  He has 30 years of experience addressing regulatory compliance and air quality modeling. We use EPA-recommended models including AERMOD–critical to determine the impact of sources such as power plants, industrial facilities, etc.

Awards: The company and Dr. Cole have received a number of rewards for our work:

Dr. Cole was interviewed on PGCTV on September 9, 2019. He emphasized that the Mattawoman gas-fired power plant, which has its Public Service Commission (PSC) permit, would if built would be the fourth gas plant within an 8-mile radius of Brandywine, MD, would deteriorate local air quality, and would make it more difficult to meet the state’s mandate that 50% of its electricity be from renewable sources by 2030.  He said that the Prince George’s Co. Council, the PSC, and the Maryland Dept. of Environment must change course–there policies and decisions at present are tantamount to climate denial. 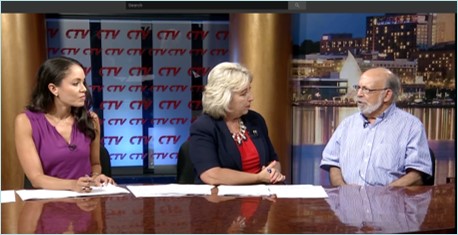 You can watch the 5-minute interview here. https://www.youtube.com/watch?v=VLkfi_bZPys

The proposed construction of the Mattawoman Power Plant (Mattawoman Energy Center) will have a major adverse impact on the Brandywine area due to increased traffic and site activities over a several-year construction period.  The map in Figure 1 shows the relationship between the power plant, Brandywine Road and other major transportation arteries in the area.

Traffic Congestion: Even now, Brandywine Road is a heavily trafficked commuting and truck route. Traffic is especially congested during the rush hours on Brandywine Road both east and west of the oft-jammed area where Route 5, U.S. 301 and Brandywine road come together (shown as area within yellow dashed line in Figure 1).

According to the Maryland Power Plant Research Project (PSC, MDE), Environmental Report[1], the plant’s construction would require a workforce of 275 employees on average over an approximately three-year period. In the peak construction period, up to 645 construction workers and other personnel would commute to and from the site. In addition, the construction will entail frequent deliveries of equipment and supplies. Construction will require large numbers of diesel trucks, including some heavy-duty trucks.[2]

The PPRP’s Environmental Report acknowledges the problem, “During the peak construction period, however, the intersections of MD 381 with Missouri Avenue and with the site access driveway would also operate at an unacceptable LOS during the evening peak hour, in addition to operational issues at the two signalized intersections. ”[3]

This conclusion is especially significant given the congestion that already takes place at the intersection of Brandywine Road and Missouri Avenue as well as the facilities located there, including: the Brandywine Elementary School, a housing facility for seniors and commercial facilities. (See Figure 2).  What impact will higher traffic levels have on cars and buses bringing students and staff to the school? How will access and parking at Chapel of the Incarnation and Community Support Systems (housed in the Chapel building) be affected by construction traffic? As Figure 1 shows there is a major health facility (MedStar) on Brandywine Road between U.S. 301 and Missouri Avenue; impact of congestion? 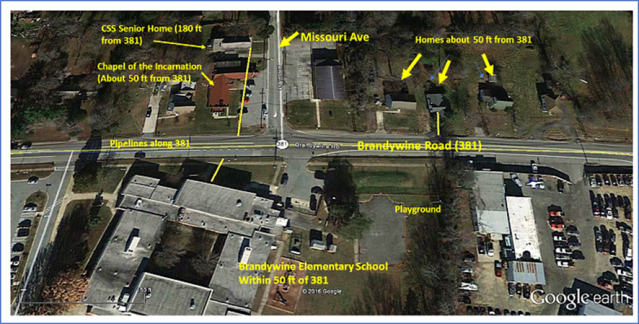 Construction of the pipelines would involve trenching to the maximum extent possible and directional drilling under major roads, rail lines or sensitive resources traversed by the facility. Trenching within the ROW of roadways could affect traffic flows where construction is staged, although construction is expected to be sequenced. ….  In addition, access to private driveways and businesses along the reclaimed water pipeline route could be temporarily disrupted by excavation activities. [4]

The CSX railroad crosses Brandywine Road close to the Mattawoman Site; to the extent that the railroad is used to deliver equipment and material to the site, additional backups and increased emissions (including diesel emissions from train engines) can be expected.

Air Pollution and health impacts: Prince George’s County is part of the DC-VA-MD ozone non-attainment region, with National Ambient Air Quality Standard exceedances reported at the nearest monitoring site (Upper Marlboro). And numerous exceedances of the 8-hour ozone ambient air standard have occurred over the past five years. This means that the ambient air in the area is unhealthful, especially for sensitive individuals including children, the elderly, and those with chronic respiratory disease such as asthma.

Construction of the Mattawoman power plant will further deteriorate air quality in the Brandywine area causing a probable increase in adverse health impacts. Motor vehicle emissions include: Emissions of concern include:  fine particulate matter (PM2.5),  diesel exhaust (ultrafine particulates, carbon particulates, etc.), carbon monoxide (CO), hydrocarbons (HC) and oxides of nitrogen (NOx). HC and NOx react in the air when exposed to sunlight to form  ozone and NO2. The World Health Organization (WHO) has designated diesel exhaust as a human carcinogen.

How will increased concentrations and repeated exposures to air pollutants affect the most vulnerable people, children—i.e. students at the Brandywine Elementary school, the elderly (those at the CSS senior home , those with chronic respiratory and cardiovascular disease?  Neither Mattawoman Energy, LLC, the PSC, the PPRP, nor the Maryland Department of Environment (MDE) have done the analysis on traffic emissions required to demonstrate that construction of the power plant can proceed without serious adverse impacts on the health of residents and workers in the Brandywine area.

These problems are heightened by the fact that three power plants are already operating or under construction within an 8-mile radius of Brandywine. Mattawoman Energy would be the fourth. The Keys Energy Center (N. Keys Road), under construction, is less than a mile from the Mattawoman site.

Henry S. Cole: A Scientific Force for Communities and the Environment

Technical Assistance to communities:  A major portion of the company’s work has been in providing technical assistance to help local organizations have an informed and effective seat at the table when it comes to the health of their communities. Cole has supported community opposition to power plants, incinerators, and other developments with adverse environmental impacts.  The work has also focused on community participation in cleanup efforts in their communities.

Technical Assistant (Superfund TAG Advisor) for approximately 10 Superfund sites, including a number of municipal and industrial landfills in which potential gas migration was an issue.

Associate Professor at the University of Wisconsin-Parkside (1969-1977).

Experience as an Expert Witness:

Examples of additional clients and projects:

Local Activism: Dr. Cole has a long history of  involvement in environmental issues affecting his own communities. He serves as a leader and expert in the opposition of two gas fired power plants proposed for southern Maryland and a Board member of the Chesapeake Sustainability Institute and Patuxent Riverkeeper.

Publications, Reports, Expert Testimony   (To download print as a PDF).